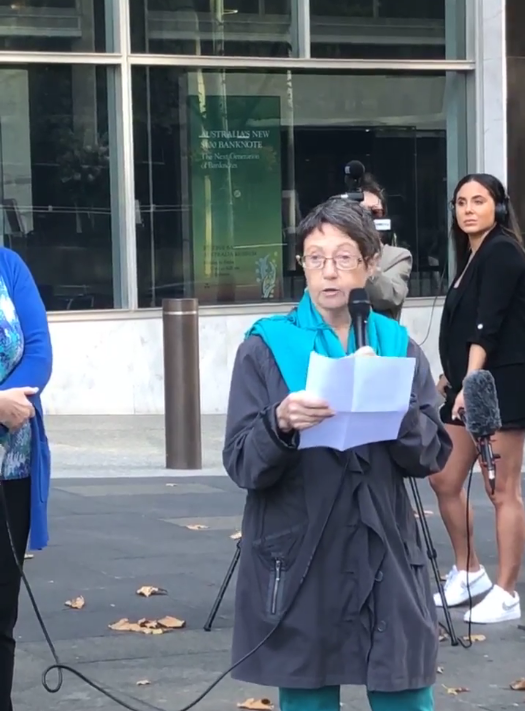 On Wednesday 12 May 2021, Hands Off Glebe, Friends of Erskineville and Shelter NSW held a rally to defend and extend public housing. The rally started at Martin Place and marched around Parliament House. This is a transcript of the speech given by Judy Mundey.

The problem of homelessness in Australia and in our city is growing. People are sleeping in railway station tunnels, there are increasing reports of older women being homeless and families are on waiting lists for many years.

This housing crisis will not be resolved by relying on the private sector.

We are here today in support of the provision of much needed public housing.

The provision of public housing by governments is not a new concept.

About 100 years ago, in 1919, the then government of the day built public housing in the Rocks area of Sydney, not so far from where we are meeting. It was to house people left homeless by the slum clearance of the area thought necessary to eradicate the Plague which was then afflicting Sydney.

In 1980 the then government of the day again built public housing in the Rocks. The back story this time was not a plague but possibly something like it, at least for those who lived there. This historic part of Sydney, some of it, in terms of white occupation, dating from the 1790s, was to be replaced with high rise commercial development.

The residents were once again to be displaced.

But with many of them having family ties in the area going back generations, they decided to fight their eviction and sought help from the NSW Builders Labourers Federation.

That Union agreed to the request of the local residents’ action group to place a Green Ban on the area which prevented its destruction.

The historic precinct was preserved for future generations.

During the course of the campaign there was some displacement and the, by then, new government of the day agreed to build public housing for those who needed it.

In 1980 that development, named Sirius, was opened. It was comprised of 79 public housing apartments ranging in size up to four bedrooms.

It was designed by Government architects and built by the NSW Housing Commission as it was then called.

That building was award winning and was home to a close knit, high functioning, supportive community.

In 2014 the government of the day announced that public housing in the Rocks and Millers Point and Dawes Point would be sold off to the private market, including the Sirius building.

They said the money from the sales would be used to provide more public housing.

It is incongruous for the Government to argue Sirius would be sold off to provide public housing. It was public housing, fully functioning, purpose built, no deterioration, in excellent condition – an exemplary example of public housing, a success story.

But it had harbour views, built right across from the Opera House and one could be forgiven for concluding the Government felt public tenants did not deserve or were not entitled to such salubrious surroundings.

In fact the whole area had become much sought after by then and so the other public tenancies in the area were also sold off to the highest bidder.

There was no concern for the well being or welfare of those who were evicted, losing not just their homes but the support of their community, as recorded in the poignant stories of their loss.

It is unconscionable that more than three years later, the Sirius building and its 79 apartments remains empty.

What is worse is that the fate that befell Sirius and its residents appears to be planned for public housing in Glebe, Waterloo and Erskineville and possibly elsewhere.

In the 1950s and 60s there was massive public housing development.

State Housing Commissions were the developers, the homes were public assets, they were affordable, they were safe. They were not known to use inflammable building products as in the Grenfell Tower in London and in some developer built projects here, there were no scandals such as in the Opal Tower or Mascot Tower where buildings were found to be unfit for safe habitation for the luckless buyers.

At the time when Sirius was built, only some 40 years ago, governments still accepted or believed that citizens deserved quality public housing.

Public housing built by the government for the people is no more an extravagant concept than is public education or public health care. A home is a basic necessity for a decent standard of living.

Many people will never be able to afford to buy a home and the increasing unaffordability of buying a home today makes the urgency for public housing as great as it ever was.

The invitation by the government to the private sector for private developments on public land in exchange for the inclusion of a few affordable units will not reduce let alone solve this crisis. We need the government to accept its responsibility and make provision for what is, after all, no more than a basic human right.

We have set up a petition letter to the Housing Minister to stop the demolition of public housing in Eveleigh and Glebe. Please sign it here and stay active in the campaign:
https://actionnetwork.org/letters/save-public-housing-in-glebe-and-eveleigh

No Replies to "Judy Mundey's speech at public housing rally"