We are always campaigning to make Erskineville better.

FoE was started by residents in 2007 in response to plans for a large supermarket on Erskineville Rd. Our campaign was a partial success in that we were able to limit somewhat the scale and impact of what ultimately became the Woolworths Metro.

The next main campaign after that was against the over-development of Ashmore Estate. The state government tried to impose 19 storey buildings but we managed to limit them to 9 storeys and get an infrastructure plan in place to help ensure that community facilities were in place to support the increased density. One side campaign related to Ashmore that we won was Save Ashmore Trees. The developer wanted to cut down the huge figs on the corner of Ashmore St and Mitchell Rd but we persuaded them reconfigure one of their apartment buildings, so today they are still standing (albeit behind a high fence).

WestCONnex – in late 2014, as the route for this mega tollroad became known, FoE held a public meeting to raise awareness. Over the following years we worked with groups opposed, holding meetings and supporting the Save Sydney Park tent occupation. As the project nears completion, we are focused on walking, cycling, public transport and limiting rat-running through our local streets.

Rail Against Rail Cuts – is a campaign to ensure rail services at Erskineville station are increased. For a while the plans for the Sydenham to Bankstown Metro made it unclear what train line Erskineville would be moved to after we come off the T3 Bankstown line. It is now confirmed that we will switch to T4 Illawarra line. We believe, along with most rail experts, that the single deck Sydney Metro trains are inferior to our dual deck trains. The capacity improvements touted are simply due to signaling upgrades which could be achieved without Metro, and which cannot run on the existing tracks. We believe it would be better to have multiple lines stop at Erskineville and the rail easement on the western side of the tracks should be used to increase system capacity. We continue to support the Sydenham to Bankstown Alliance and SaveT3.org.

Lift Erko – was our successful campaign to get lifts installed at Erskineville Station. Starting in 2014, we added a new demand in 2019 for a southern entrance to support the growing population in the Ashmore Estate. The City of Sydney council endorsed our campaign and local MP Jenny Leong lodged our 500+ petition signatures with the NSW parliament. Construction began in 2021. We continue to push for all platforms to have lifts at both ends of the station and for the southern concourse to be extended west to the back of Kirsova 2 playground.

One Vote One Value – an ongoing campaign to repeal the “two votes for business” law in the City of Sydney, introduced while Mike Baird was Premier of NSW.

Save Public Housing in Glebe and Eveleigh – a collaboration with Hands off Glebe to stop the demolition and 70% privatisation of public housing. This campaign has merged into Action for Public Housing.

#buildabridge – a campaign for an active transport crossing over the Eveleigh railyards. 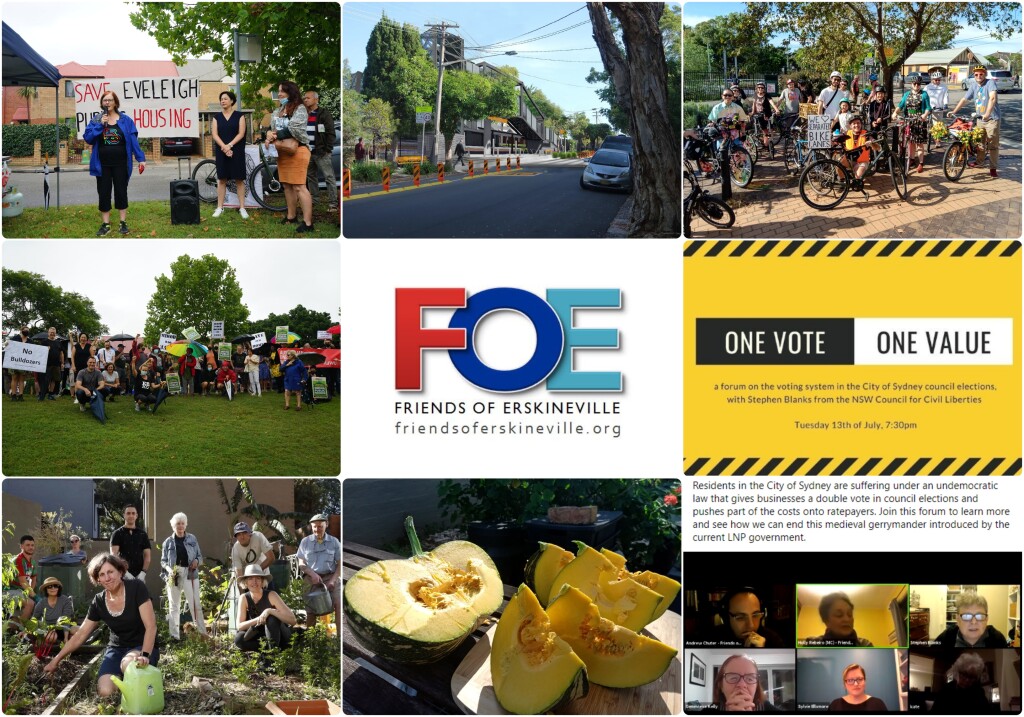